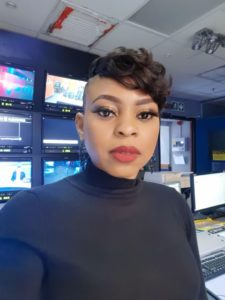 Amukelani Magomani was born in 1982 in the rural village called Nhlengani,Shikundu in the outskirts of Malamulele in Limpopo Province. She’s the first of the three children of Mr Josias and Mrs Gladys Magomani.

Affectionately known as Amu , she began her career as a News Reader at the age of 19 while she was working for a community Radio station in Tshwane.

It i also worth mentioning that she’s a managing director of her non profit organization called Amukelani Magomani Foundation which exists to assist  women who suffer from endometriosis through sharing of knowledge that will lead to accurate diagnosis and early treatment.

Amu is also immensely passionate about her career in news and with the positive response she receives from viewers every day, it is safe to say she’s steering her ship in the right direction.