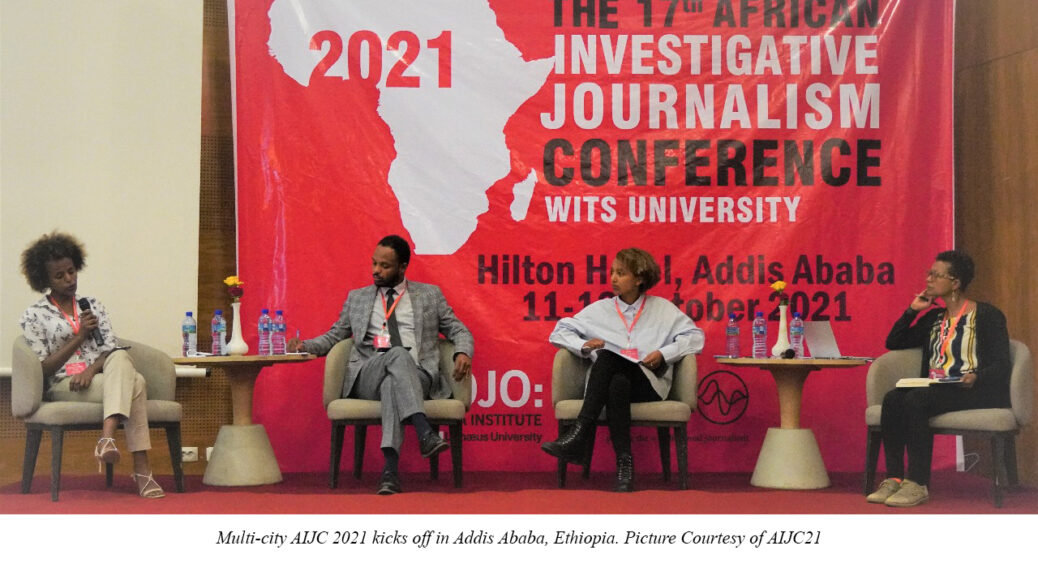 As journalism evolves and is under continuous pressure with newsrooms staffed with junior journalists and limited resources as the competition for dwindling advertising revenue becomes fierce, Covid-19 added to the woes of journalism. The pandemic dealt a huge blow to most media houses, forcing journalists to innovate as they strive to retain, and even increase their audiences.

Despite these challenges, communities looked up to investigative journalists to expose wrongdoings by those in power, particularly during lockdowns when many governments seized power and mismanaged funds meant to provide services to citizens.

The African Investigative Journalism Conference (AIJC), an annual conference that brings together journalists from across Africa to network, debate issues and learns cutting edge tools that improve their craft, showcased resilience as well as emerging trends displayed by African investigative journalists as they strive to produce great-work during a pandemic. 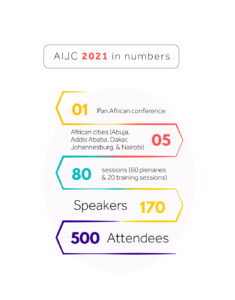 In its 17th year, this year’s conference was held across five African cities in a hybrid format that consisted of limited numbers of people attending in-person while the majority joined the events online.

Taking place over five days in October, the conference kicked off a week after the Pandora Papers, the largest global investigative journalism exposé that revealed secret offshore accounts and illicit financial activities of world leaders.

Addressing attendees on the opening day of the conference, AIJC convener, Adjunct Professor of Journalism at Wits University, Anton Harber, commended African investigative journalists for holding power to account and encouraged them to never be discouraged from tackling tough issues, even when there are efforts to silence them.

“We know there are countries that are fairly open and where investigative journalism is practised with reasonable ease and effectiveness. We also know there are other countries where is it extremely difficult and a few countries where it is almost impossible. What is striking is how in all of these places we see people with dedication and courage doing what they can to hold power to account to get the stories out on what is happening in their countries and to play the critical role that journalists have, and must play, in our continent,” said Harber.

The conference had about 170 speakers from different parts of the world, taking part in 80 sessions and sharing their expertise while also learning from one another.

One of the trends that emerged strongly during this year’s edition of the AIJC was the importance of collaborations. While these are nothing new in investigative journalism, the conference revealed that during a period when travel is limited due to the pandemic and so are resources in newsrooms scant, collaborations have become much bigger and more effective, without taking away the competitive edge of different media outfits.

Dubbed the largest investigation resulting from leaked documents, the Pandora Papers session, which kicked off the AIJC conference, was a perfect showcase of ‘strength in numbers’. A total of 600 investigative journalists, part of the International Consortium of Investigative Journalists (ICIJ) were responsible for turning 12 million secret papers into country specific stories.

Carte Blanche Investigative Journalist, Latashia Naidoo, who was responsible for the South African segment of the Panama Papers, said she went through months of sleepless nights while trying to decode the documents and the new approaches she had been exposed to through ICIJ.

“I was very excited to get on board, this was my first time to work on a document leak and on something of this magnitude. I expected to just punch in names of high profile politicians and business people and find the data of them immediately, which was not the case. It took me a while to get my head around and a fundamental understanding of what this document leak entails so that I would be able to dig deeper and find information of high profile people implicated in illicit financial flows,” said Naidoo, adding that she hoped that more journalists would be open to collaborative efforts.

Presenting during a Collaborative Investigative Journalism Workshop, Nigerian journalist, Vanessa Offiong shared how a trans-continental collaboration involving eight investigative journalists helped to de-stigmatise sex work in her newsroom once it was revealed that most women are forced into sex work due to failures by governments to provide basic services such as housing, water and sanitation and education to disadvantaged communities.

“Working with eight journalists from South Africa; Nigeria; Mali; Congo; Senegal and Liberia, we looked at how government failure to supply basic services had pushed women to sell their bodies to provide basic needs like feeding their families, send their children to school and get medication.

This story provoked people and was spoken about a lot. For the first time journalists, even from my newsroom, took a step away from judging women and instead focused on how these women were failed by governments,” said Offiong.

In South Africa, editor of Cape Town community newspaper, Mother City News, Steve Kretzman shared how a collaborative effort resulted in the story on waste water management covering a larger geographical area and being published in the Daily Maverick, where it managed to get the attention of the concerned government department, resulting in an impact.

“The project called rivers of sewerage, through a grant provided by the CCIJ, allowed me to bring onboard people with other abilities such as a videographer to in the reporting. I also brought a journalist based in the Eastern Cape to speak to communities there to illustrate how rivers are polluted. Money from the grant was spread out to build the story and afforded me access to more skills that enriched it, resulting into a national story,” he explained.

Another investigative trend that emerged very strongly during the AIJC conference was undercover journalism, which enables the storyteller to get first-hand experience and even be the story.

The founder of the Centre for Investigative Journalism in Nigeria shared how his brand of investigative journalism allowed him to get to the story without being detected and managed to gain great insight, which has won him numerous awards. In 2020, Soyombo went undercover pretending to be a mental health patient and got admitted for three weeks in a psychiatric hospital in Lagos. Soyombo encouraged investigative journalists to be ‘brave and take risks in the public interest’ when going undercover to get a story.

To succeed in their quest of getting the right information and be able to separate facts from fiction, investigative journalists need to embrace cutting edge digital tools, conference attendees learned. Being a technophobe in a digital world is no longer an excuse as journalists use various tech tools to crack stories.

From various sessions, the trend of using digital tools, some mostly available freely online, emerged as one of the key trends that allow investigative journalists to debunk myths, check facts and also bring back credibility to the craft.

As the conference wrapped up, it became apparent that Africa produces high-quality investigative journalists who are capable of tackling global stories. The proliferation of digital platforms has enabled African journalists to work together across borders and even attend conferences such as the AIJC in the comfort of their homes.

Aurelia Mbokazi worked as a virtual Newsroom Editor at the AIJC2021, affording her an opportunity to interact with speakers and investigative journalists who contributed content to the AIJC website.